A magical encounter between two Italian pianists who, for various reasons, are a source of italian pride in the world, has produced a beautiful project , which then took the form of a disc that not to be missed in the Italian discography.

Antonio Zambrini has worked during his career , with Lee Konitz , Enrico Rava , Ben Allison, Hamid Drake, Tino Tracanna , Gabriele Mirabassi , Javier Girotto and Paolino Dalla Porta . His compositions have been appreciated and interpreted by high-caliber musicians such as Lee Konitz , Ron Horton and Stefano Bollani . The latter in 2006, in agreement with Manfred Eicher ( ECM patron), opened its disc "Piano Solo " (ECM / Ducale ), just with the song " Antonia " by Antonio Zambrini .

Rita Marcotulli is multi-faceted musician, composer , winner of a wealth of incredible prizes, in recent years. She recently participated in the making of the soundtrack of the film Basilicata Coast to Coast , thanks to this work she received the prize 'Ciak d'Oro' in 2010, the 'Nastro d'argento' to the best soundtrack in the same year , the 'David di Donatello' for best musician in 2011 ( the first woman ever to receive this award) . Her collaborations are among the most prestigious in the world art scene: Chet Baker, Jon Christensen, Palle Danielsson, Peter Erskine, Steve Grossman, Joe Henderson, Helène La Barrière, Joe Lovano, Charlie Mariano, Marilyn Mazur, Pat Metheny, Sal Nistico, Michel Portal, Enrico Rava, Dewey Redman, Aldo Romano, Kenny Wheeler, Norma Winstone.

Therefore this is one of those rare cases where two of the leading exponents of the Italian jazz scene combine their compositional and pianistic sensitivity without necessarily seeking a common ground in the standards of the American tradition.

You can feel the magic and intensity of "La Conversazione " during breaks and dynamics. The pianos are compared, chasing each other and sing together.

Two different styles with a common language: the sense of Italian jazz. 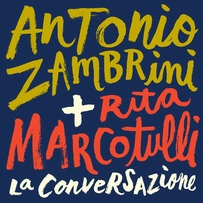